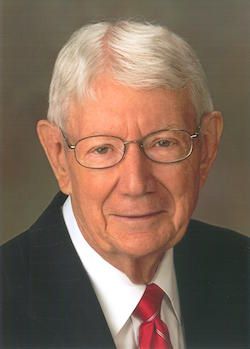 The Rotary #14 Nebraskan of the Year award was established to honor and recognize the accomplishments of a Nebraskan who has distinguished himself or herself through service to others in keeping with ideals of Rotary International.

Each year one honoree from a statewide field of nominees is selected based on honesty, integrity and concern for others; service in charitable and civic causes and; leadership and significant accomplishments in his/her profession or volunteer activities.

Dr. Massengale is President Emeritus of the University of Nebraska, Director of the Center for Grassland Studies and a Foundation Distinguished Professor. Prior to becoming President Emeritus in 1994, he served as President from 1991 to 1994, as Interim President from 1989 to 1991, as Chancellor of the University of Nebraska Lincoln from 1981 until 1991, and as Vice Chancellor for Agriculture and Natural Resources from 1976 to 1981. Prior to that time, he was a professor and associate dean of the College of Agriculture at the University of Arizona. Following his military service, he earned his B.S. from Western Kentucky University and his M.S. and Ph.D. from Wisconsin University. Throughout his career he has distinguished himself in academia with the publishing of numerous papers, national and international presentations, serving as the principal or co-investigator on a number of research studies and working to build cultural understanding across the world around the study of Agronomy, Botany, Plant Physiology, and Crop Ecology. Massengale’s most notable work is the creation of the Center for Grassland Studies. His leadership has help grow the program into an integrated study of grassland agriculture and turf management with a staff of over 130 across all four University of Nebraska campuses. He has served on numerous national commissions and advisory boards and currently serves on the Board of Trustees of the Nebraska Historical Society Foundation, the Board of Trustees for the University of Nebraska Foundation, and the Board of Trustees of the Bryan Medical Center, among others.

Dr. Massengale and his wife, Ruth, have two children: Alan and Jennifer